Khadiga, a young mother of 17 lives alone with her baby after her husband left for work in a remote city. On an ordinary day she makes her way through the hustle of Cairo streets to do some visits when she starts to feel pressured and uncomfortable with the surroundings. 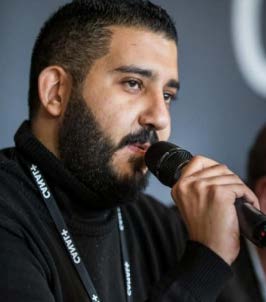 Morad; an Egyptian Filmmaker, born in Cairo. He worked as an Assistant Director in several independent lms; he collaborated as an Executive director in “Souad” feature lm – ofcial selection in Cannes Film Festival 2020 and Berlinale. He wrote and directed two short lms “Henet Ward” and “What we don’t know about Mariam”; both had their world premieres in “Clermont-Ferrand” and has been selected in other major festivals (BFI London – Palm Springs – Busan – Thessaloniki – Stockholm – Karlovy Vary – FIFF Namur – Cinemed Montpellier – Shanghai – Durban – EL Gouna – Cairo) and won more than 30 international awards.