BEIRUT: EYE OF THE STORM

Four young women artists in Beirut document the momentous October 2019 uprising against corruption and sectarian rule. The prevailing mood is one of hope and change. But a few months later, Covid-19 locks down the city, and all optimism evaporates with the massive explosion at Beirut’s port. Will the young women be able to hold onto their dream of building a new Lebanon? This non-chronological personal account of a tumultuous period in recent Lebanese history explores the role of women, creativity and change. 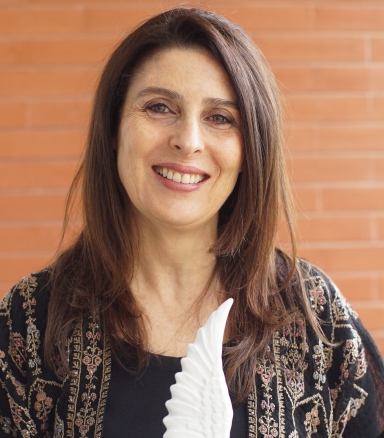 Mai Masri is a Beirut-based Palestinian lmmaker who studied lm at San Francisco State University, USA. Her lms were screened worldwide and won over 90 international awards including the trailblazer award at Mipdoc Cannes in France (2011) and the lifetime achievement award at El Gouna Film Festival in Egypt (2019). She reached international acclaim with her debut feature lm, 3000 Nights (2015) which was premiered at Toronto International Film Festival and won over 28 international awards. She is also known for her humanistic and poetic documentaries: Children of Fire (1990), Hanan Ashrawi: Woman for Her Time (1995), Children of Shatila (1998), Frontiers of Dreams and Fears (2001), Beirut Diaries (2006), 33 Days (2007) and Beirut: Eye of the Storm (2021). She also co-directed with her late husband lmmaker, Jean Chamoun : Under the Rubble (1983), Wild Flowers (1986), War Generation – Beirut (1988), Suspended Dreams (1992), and produced: In the Shadows of the City (2000), Hostage of Time (1994), Women Beyond Borders (2004), and Lanterns of Memory (2009).